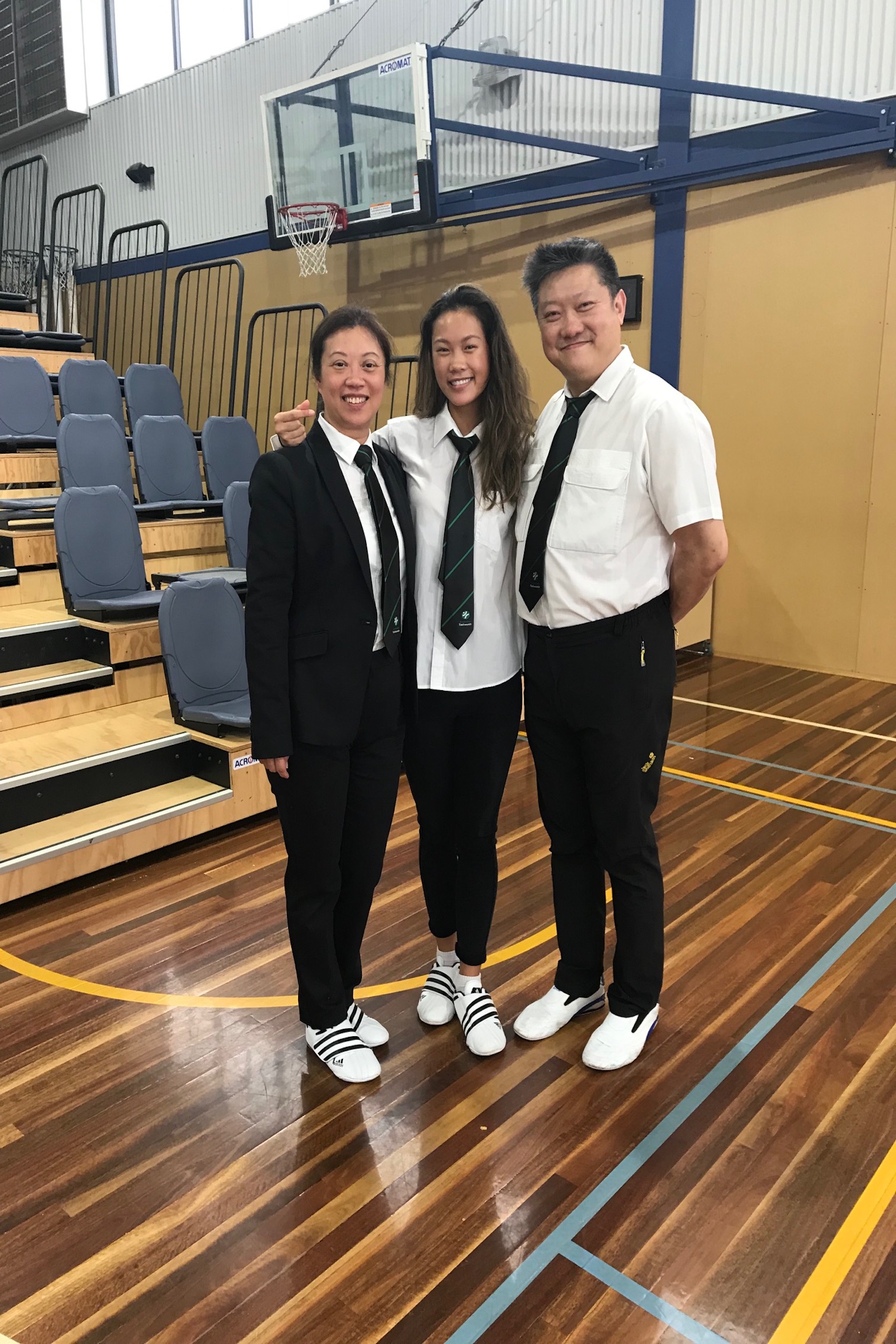 The family finding family in Taekwondo

A national challenge was issued recently to; “Capture the magic of Taekwondo into a single shot.”

The #Taekwondownunder photo competition wanted to capture the #People, #Fun and #Spirit of the sport in its many forms across Australia.

Here is the story of the winning shot in the #People category.

When you appear in this picture.

It seems to be a typical family photo; featuring Sylvia, Tiffany and Cheuk Hung (Cheuy) Chiang, from Schembri’s Taekwondo & Self Defence Centre in Melbourne.

But Cheuy explains why there is much more going on here than meets the eye.

“Our daughter Tiff had just turned 16 which is the minimum age to be examined and qualified to be a Poomsae judge,” he says.

“I photograph to document the highlights of my life and I expect to be happily viewing this photo in a nursing home when my memory loses its sharpness.”

The #Taekwondownunder photo competition judges gave it the #People prize because it perfectly showcased how combat champions are only one part of what makes Taekwondo magical.

It is a theme Cheuy is passionate about.

“We entered this photo hoping to raise awareness that moderately skilled Taekwondo practitioners can also be part of championships and give back to the sport by being judges and referees; that Taekwondo is rich in challenges outside of grading to the next belt level,” he says.

“We also like to raise awareness that Taekwondo suits all ages and physical levels so that, unlike a number of other sports, the entire family can participate.”

For the Chiangs, family involvement is crucial.

So is family acceptance.

Cheuy points out one of the apparent paradoxes about Taekwondo.

Much of the focus is on ranking and classification and yet it is one of the few places some people can go where they don’t feel like they are being judged.

“Unlike acquaintances and family members outside the Taekwondo community, Taekwondo people don’t judge us because of financial, educational or racial background,” he says.

“There is no social class status even though a belt ranking amongst the cohort is observed.

“We are equally respected despite our non-elite skill levels.

“Different Grandmasters are more than willing to give up their time to impart advice with the sole purpose of improving us looking after our best interest.

“These are the people who inspire us to pay forward, to give back to the sport.”

For Tiffany, that meant becoming a Poomsae judge.

For you, it might mean something else. Cheuy is so moved by the camaraderie of Taekwondo, he has advice for anyone associated with the sport.

“TKD training and competition, however, does not encourage thuggish behaviour.

“TKD ensures injury prevention a priority.  The primary role of a sparring referee is to ensure the players walk off the court injury free.

“The TKD community is a convivial fellowship where club owners support one another rather than a dog-eat-dog environment.

“Competition is not just for the elite.

“You have to start somewhere.

“There are different levels of competition to cut your teeth.

“Getting on the mat is exhilarating.

“Even modestly skilled people like myself, wife and daughter got to experience state, national and international competitions because we dared to register.

“You sacrifice a lot of time chaperoning your successful children to and from training and competitions.

“Time to cash in your devotion by getting on the mat with them.

“You are there anyway. You might as well make time productive to yourselves.

“Getting on the podium with your family wearing medals makes a very, very special family portrait.”

So special, it may even win you a national prize.

For people self-described as “modestly skilled”, the Chiangs are proving to be true Taekwondo champions.