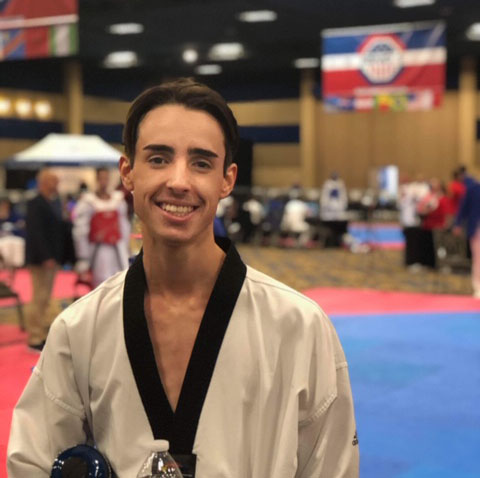 It took a global pandemic for Australian Taekwondo star Bailey Lewis to fully understand how much love and support there is for him to take on the world.

The 22-year-old hosted four interactive training sessions via video link Zoom as part of an Australian Taekwondo COVID-19 response initiative to give “isolated” players across Australia the chance to learn from our best through a series of video training sessions.

Unsurprisingly, hundreds joined in, aged from five years old to sixty. They have loved the sessions, lockdown-weary parents in particular offering lots of positive feedback to Australian Taekwondo.

The real surprise was how much Bailey, Olympian Carmen Marton, World Champion Jaouad Achab, and former World Number 1 Aaron Cook – who all hosted at least one session – gained from the experience.

“I really didn’t know how many kids were out there that actually looked up to me and had so much passion for Taekwondo,” he says.

“In my own elite Taekwondo side, I didn’t see much of that except at my own club, it was shocking to see how much we all are together; all with the same mission to get better.”

Australian Taekwondo participation manager Ben Exton is thrilled with the number of people who engaged from across Australia and the sense of unity the initiative has fostered, especially amongst those in small and remote clubs.

“People were obviously hungry for an outlet and we were so happy we could provide one,” he says.

“When everyone was in isolation, the session was great for getting them moving, the training grew their knowledge and the connection with each other and our stars was really uplifting in a tough time.”

Australian Taekwondo has announced virtual training sessions with the stars will become a monthly event.

Bailey believes he witnessed a cultural shift within Taekwondo during the process; a sense of secrecy replaced with a spirit of sharing.

“A lot of clubs used to keep to themselves but we are slowly starting to engage,” he says.

“I just wanted to try to give away as much of my knowledge as I possibly could because if everyone is going - we are all going to get better.

“I didn’t know what to expect but I got so much positive feedback.

“I had heaps of kids messaging me saying thank you. They loved it.

“So, I was pumped for the next one and tried to make it better every time.”

After a fifth at the last World Championships, and with an Olympic ranking of 21, Bailey is back in full training and has returned his focused to competition but, with a background in video editing and production, can see exciting possibilities for virtual connection.

“Straight away I was like yeah that’s great idea,” he says.

“It was up my alley and gave me so many ideas for the future for how we can keep incorporating that style of online learning with the kids that don’t have elite athletes to learn from.

“I would like to try and run online seminars where I could teach people from other states or have a mix of online sessions and face to face.

“We could watch their fights and review them together.

“It’s all in the early stages but I think it could be really good to pass on knowledge.”

Taekwondo is about winning by using your strengths and minimising your weaknesses and it seems the coronavirus crisis of 2020 has been just another example.