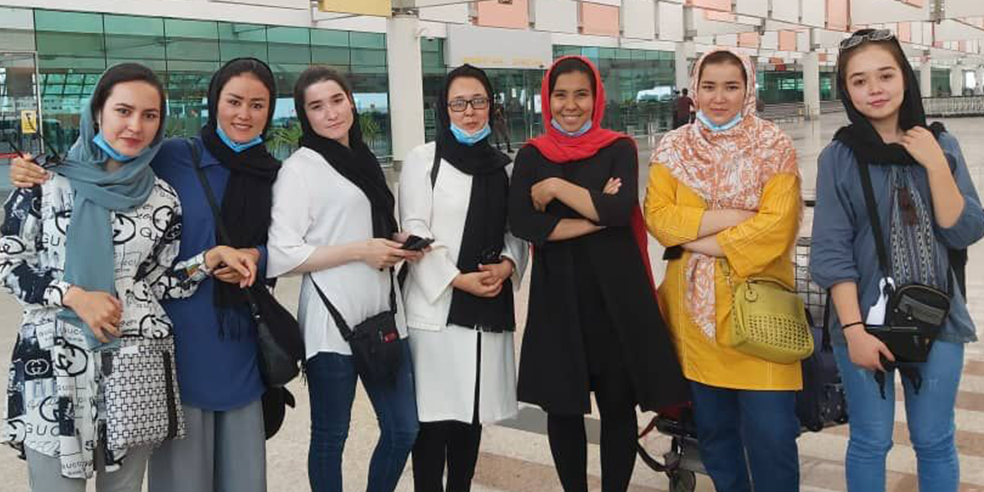 Australian Taekwondo, together with the Australian government and Oceania Taekwondo, have secured the safe transfer of eight taekwondo athletes fleeing Afghanistan to Pakistan.

The remarkable story of eight Afghanistani taekwondo athletes fleeing Afghanistan to Pakistan are now on their way to Australia after a simple phone call from Ali Rahimi, a Melbourne based taekwondo international referee, to Australian Taekwondo CEO Heather Garriock.

The meticulously planned evacuation strategy carried significant risk, especially since the athletes were young women on their own and without any money.

That person was former Socceroo Craig Foster, who has been a vocal advocate of humanitarian causes and has helped a number of refugees in Australia.

"Fozzie answered my call and bent over backwards to help; he told me what documents we needed, what information we required from the girls and what visas we had to obtain," explains Garriock.

"Ali and I spent the night putting together all eight athlete visas, which was a challenge within itself. We had to collate all the passports and ID cards as well as the logistical details of how to get the ladies somewhere safe."

Foster advised Garriock to find an immigration lawyer. By an amazing stroke of luck, the President of Oceania Taekwondo John Kotsifas, happened to be just the man.

"I phoned John and he was straight onto it. We needed to communicate and coordinate with the ladies in Afghanistan. Fortunately, Ali was able to talk with the girls in Farsi, the local language, and get all their information together.

"The youngest girl, who is only 16, speaks reasonable English and I was able to communicate with her. This gave me piece of mind, especially with the group being in a war zone.

"Between Ali, John, Fozzie, the ladies and myself, we needed to be on the same page and coordinate everything clearly to make sure we had everything done correctly. Logistically it is an incredibly difficult exercise.

"After sorting all the information and liaising with a number of ministers, we were finally able to secure special safe haven visas for the ladies to come to Australia."

However, the extraordinary mission was still far from complete. While the group waited for confirmation they had secured visas to Australia, the ladies had to go into hiding, surrounded by gunfire and a genuine threat for their lives.

As Kabul airport had closed, a plan was developed to get the ladies to the Afghanistani/Pakistani border - a dangerous place at the best of times, let alone with the Taliban taking over the country.

As Garriock explains the harrowing details of what transpired within the space of a remarkable few days, the story gets even scarier.

Operating on little or no sleep, Garriock, Kotsifas and Rahimi fielded late-night phone calls and messages for days on end from the ladies, who had no idea what would happen in Afghanistan, let alone what challenges they would face at the border.

"It took hours to get them across the border into Pakistan," explains Garriock. "At one point, they got to the border but didn't have the correct letter. This delayed things even more and they had to go back to find a safe place again."

"The ladies had to find male drivers to get them across the border. Under the Taliban rules, women aren't allowed to drive. They were relentlessly harassed and belittled at the border and had to continually explain themselves, just because they were female."

"It would have been a frightening ordeal for them."

While there were eight visas secured, only seven of the ladies are currently in Islamabad, Pakistan's capital city. One of them had to stay home in Kabul due to the violence that surrounded her.

"She is still stuck in Afghanistan, but we have definitely secured her a visa to Australia, so we are working hard to get her somewhere safe as well and eventually to Australia," Garriock explains.

Garriock paid a glowing tribute to the Australian Government for their tireless efforts behind the scenes, as well as Kotsifas, who liaised with the Pakistani High Commission, with their efficiencies instrumental to the success of the operation.

"John stayed connected with the Pakistani High Commission and once they crossed the border, we relied heavily on their support and security to transport them to the capital of Islamabad, which was 19 hours away by car."

Kotsifas himself explains further details of what happened, with a significant number of hurdles overcome thanks to the remarkable resilience of the ladies involved.

"These women were very brave, and despite the obvious dangers they faced if they were caught, they slowly made their way towards the border with great determination and amazing resilience," he said.

"Heather kept in constant contact with the athletes by mobile 24-7, whilst I tried to negotiate with the Pakistan High Commission to ensure their passage through the border.

"There were constant hurdles and when they finally got to the border, they were not permitted to cross the border into Pakistan."

"We finally managed to get the border crossing permits only to be told that the athletes needed to travel another 20 odd hours away to a different border in order to be permitted entry into Pakistan."

"This would prove very dangerous to the athletes and their lives could have been placed in jeopardy if they had to travel so far and to cross checkpoints that by now were being controlled by the Taliban."

The entire process took over a week, but seven of the ladies are now safely in a hotel in Islamabad, Pakistan's capital, as they await a flight to Australia.

It is a remarkable story and one that will surely have more chapters to tell, especially when the ladies arrive safely in Australia from Pakistan.